For many centuries, perhaps even a millennium, the West Fleet has been an ancient sanctuary within the Reserve, and not that many decades ago it was known as such. In his book ‘Nature Conservation in Britain’ (New Naturalist Series), Sir Dudley Stamp referred to it as ‘the second oldest nature reserve in the kingdom, flourishing in 1393, and the breeding place of a great herd of mute swans’. The boundary between West and East Fleet is the point at which the water becomes tidal and is helpfully and legally defined today by the parish boundary that exists between Abbotsbury and Langton Herring. Abbotsbury’s swans featured again in 1591, in the famous ‘Case of the Swans’. Swans in the Fleet’s ‘open’ water were determined as being royal and as such were seized by the Sheriff of Dorset, the remainder in private water considered to be privately owned. Centuries later when the Air Ministry proposed to base the pre WWII rocket and bombing range on Chesil, it was the representation of Lord Ilchester that led to the chosen site being moved four miles from the Swannery so that the risk of disturbance was minimised not only to the swans but also to the only two sizeable tern colonies remaining on the south coast.

More recently even more nature conservation benefits in the sanctuary area have been recognised. Coupled with the facts that Chesil Beach is privately owned and there is no right of public access along the beach from Abbotsbury to Portland and vice versa, the sanctuary has remained almost entirely free of damage caused by human activity. Rare shingle plants flourish. Furthermore the natural spread of vegetation over the pebbles on the inner flank of the beach has only been impacted where the over wash of waves has occurred in severe storms. Some sections may have remained intact for many years and totally contrast with others that have not.

The aerial photo below shows how water from overtopping waves has drained into the Fleet in two small, narrow areas with a force that has been sufficient enough to push pebbles through the saltmarsh ‘wall’ (the line of dark vegetation). The hollows caused by the displaced shingle are known as canns. Most canns have been established for a long time and being re-worked in every significant storm, vegetation in and around them is non-existent. Elsewhere on the beach there are series of joined-up canns stretching for up to 100 metres. 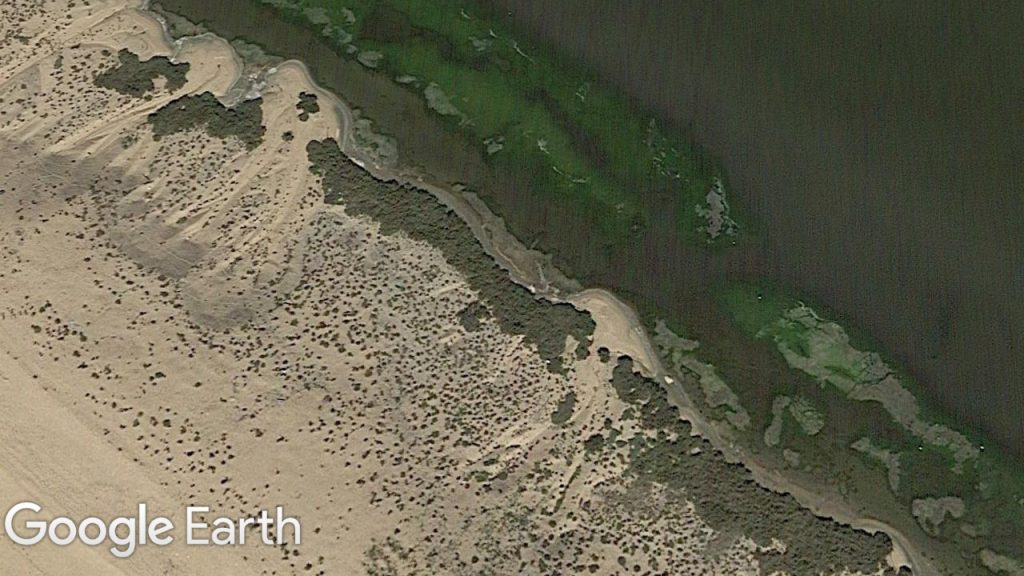 It is not known exactly how long it takes for areas of shingle to stabilise, for pebbles to remain in a fixed position long enough to support a thin tilth of organic matter derived from rotted over washed debris, bird droppings and atmospheric dust. Such matter provides just enough nutrients to sustain a mixture of lichens, grasses and flowering plants. Further time must then pass for the vegetation to spread from one pebble to another as shown in the photograph below.

The beach adjacent to the East Fleet has similar areas of stable shingle which now enjoy the same protection as those in the ‘sanctuary’ and which for other natural reasons (e.g. pebble size) may vary in character. But they are probably not as ancient and well-preserved as those in the ‘sanctuary’. Studies of these features in both the East and West Fleets however, coupled with other related research, help to further determine the make-up of the internal structure of the beach, and its resilience, as a whole or in part, to the impacts of sea level rise and violent storms, the frequency of which is increasing.

With thanks to Don Moxom for this post.
For many years Don was the Warden here on the Reserve and his knowledge and experience continues to guide the reserve team.