A stormy start to the year 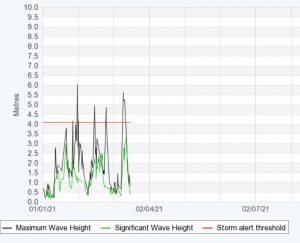 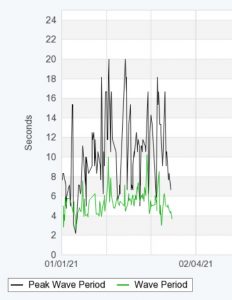 The Chesil Wave Rider Buoy, as can be seen in the graphs above, has recorded wave height above the threshold (the red line) on a number of occasions so far this year. Most noticeably there was a swell event on 30th January 2021, with six metres waves coming in at twenty second intervals. As reported in the Dorset Evening Echo on 1st February, Emergency Services were called to Chiswell on Saturday night after a 999 call at 8.10 pm, to advise a crowd of 200 people gathered to watch the waves and usher them from the area. Three Coastguard officers were injured after they were hit by a ‘freak wave’ during the storm which caused severe flooding. It was the same concern at Lulworth where people were trapped between sheer cliffs and huge waves. The following day the photograph and caption below appeared on PBO website and is used here with the permission of Martin Cade at the Observatory. 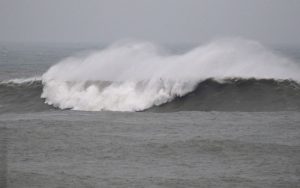 ‘There was as huge a swell running off the Bill as we’ve seen for a long time: waves like this one were more than a mile out from the Observatory  and many that absolutely dwarfed Gannets and the like must have been 10 metres high’.

Following the event a visit was paid to the beach at Abbotsbury. No over-topping had occurred but it was obvious that there had been a brutal storm. Wave water had smoothed the surface of the beach beautifully. Shingle had been pushed up to the crest in a sheer, almost unclimbable, ledge. Huge cusps (70 paces between the horns) had been formed, and in the bays of the cusps where the shingle had been dragged back into the sea, the sandy/gritty substrate of the beach had been revealed.

Further east, towards Portland, the cusps gave way to overtopping waves. The canns or hollows behind the beach were once again sharply defined by huge volumes of water draining into the Fleet. Further west though, towards Bridport, the cusps persisted and as the beach became narrower and shallower the soft cliffs behind it had been eroded not only at the toe by the waves but also on the face from above by floods of freshwater draining off the land.

In one of the subsequent high seas, as is sometimes the case, lumps of peat were thrown up on the beach. These derive from the leading edge of a layer of mainly plant matter crushed and flattened by the beach as it rolled in and over it some 5,000-7,000 years ago. Apart from the peat and a line of dog whelk egg cases, hardly any debris, manmade or natural, was observed. 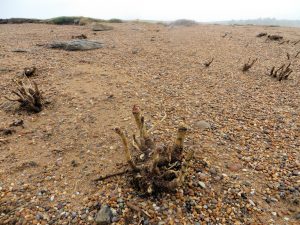 With thanks to Don Moxom for this report.