Some New and Notable birds to the Reserve in 2019

There were notable influxes of both Short-eared Owls and Cattle Egrets last winter, with at least ten of the former and up to fifty of the latter frequenting the fields around The Swannery and nearby Clayhanger Farm. The latter have only recently colonised Britain, following in the footsteps of the now more familiar Little Egret. 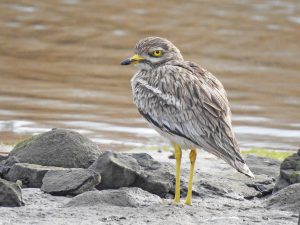 Another unusual influx took place in July when a flock of over twenty White Storks were seen. It turned out they had been released in West Sussex as part of a re-introduction scheme. Even so it was an impressive sight to see and one that has probably not been seen in Dorset for several hundred years at least!

Along with quantity there was also quality… In April a ‘strange bird’ photographed by Kevin Butler (Abbotsbury Swannery) turned out to be The Swannery’s first Stone-curlew and in July Kev did it again when a photo of his, of an odd ‘penguin-like’ bird, turned out to be the first Night Heron! 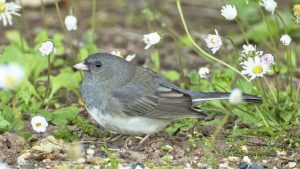 What drew the biggest crowds though was a Slate-coloured Junco found by a visiting birder in June. This sparrow-like bird is an American species that is only seen very rarely in Britain. The fourth new addition to the Swannery bird list was a White-winged Black Tern, which lingered briefly over The Swannery embayment in September. Other rarities included a flock of Greenland White-fronted Geese, a Glossy Ibis, two Temminck’s Stints, two Caspian Gulls, a Ring-billed Gull and singles of Dusky Warbler and Aquatic Warbler. Quite a tally!