This month saw the Swannery’s 20th Biennial Round-up. This is when Swannery staff, the Reserve team and over 100 volunteers, over a two-day period, push Mute Swans along the Fleet up to Abbotsbury. This is possible when non-breeding Mute Swans go in to moult, meaning that for a short period of time they are unable to fly, most moult during July.

Once in the Abbotsbury embayment volunteers on foot and in canoes slowly and gently push the Swans in to holding pens on the shore.

Once in the pens a team of catchers pass out the swans to volunteers who carry their swan throughout the processing stages to be health checked, weighed, vaccinated and reringed if needed, before being released back in to the Fleet. On the day 857 swans were caught and processed, including our resident Whooper who has been staying on the reserve since 2018. 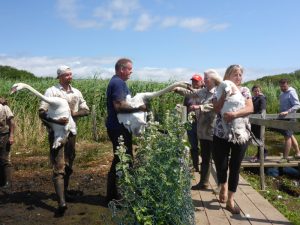 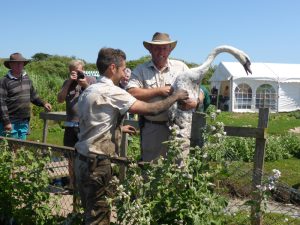