Another great year for the Reserve’s cygnets

This year has been another good year for our nesting birds along the Fleet and productivity has been very high. Our two annual colonies of nesting terns have both had their most productive years to date. Our other nesting birds on the Reserve, which include Oystercatchers, Ringed Plover, Shelduck, Barn Swallows, Reed Sedge and Cetti’s Warblers, plus many more, have all had a productive year owing to the reasonably good summer weather, producing lots of food, particularly insects for our smaller birds.

The resident nesting colony of Mute Swans at Abbotsbury have also had another successful year and on the 3rd October the cygnets of the year were ringed. Now in October, the cygnets are growing fast, they are putting on good weight and there wings are really developing, to the point where most are beginning to learn the tricky art of flight.

Before these cygnets head further down the Fleet to spend the winter on the eel grass beds, located in our essential and relatively undisturbed areas, their adult rings need to be fitted. At this point the cygnets are big enough to take the large plastic ‘Darvic’ ring and the metal ‘BTO’ (British Trust of Ornithology) ring that you commonly see on adult swans. Once ringed the cygnets can begin their life on the Reserve and may venture further afield to neighbouring counties or even further. 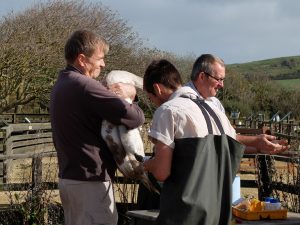 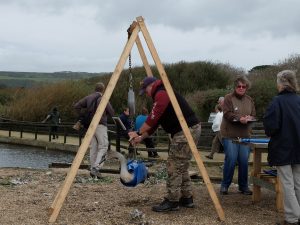 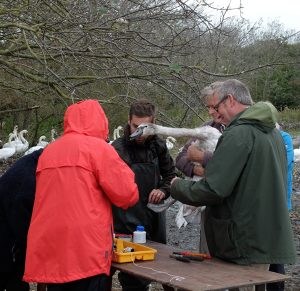 Thank you to Dave Callaby for the use of his images.