Grey Phalaropes seen on the Reserve this week

With the strong and blustery westerly winds hitting the UK over the weekend, a handful of very small and delightful individuals from the Sandpiper family have been spotted on the Reserve. The Grey Phalarope is a small wader that breeds in the Artic and migrates down to spend the winter on the Atlantic ocean off of South America. Grey Phalaropes will spend most of their lives out at sea on the open ocean and are commonly seen near groups of whales feeding, as they are attracted to the plankton brought to the surface by the feeding whales. The individuals that turn up in the UK, like the ones on the Reserve, have been blown off course by strong westerly winds, like what we have just been experiencing. Over the weekend and Monday, three individuals were recorded at the western end of the lagoon at Abbotsbury with an additional two seen Monday afternoon taking todays total up to five individuals and one different individual was recorded on Monday at the eastern end, at Ferrybridge. 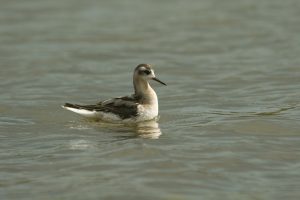 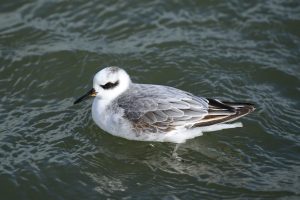