The reason the Oil beetle is such a fascinating creature is its life cycle. The beetle solely rely on mining bees nesting areas. The beetle will locate these underground nests and dig two to three burrows where the female can lay up to 1000 eggs. The images below show this burrowing/egg laying behaviour. The video is a short clip showing the Oil beetle burrowing.

The females are generally larger than the males and become much larger when their abdomens become swollen with eggs. Once the eggs hatch, the larvae (known as triungulins) will climb on to nearby flowers and wait for other solitary bees to collect nectar and pollen. The beetle larvae will then climb on to the bee and unwittingly be taken back to the bees nest where it will find a plentiful supply of eggs, nectar and pollen to feed on. The larva develops in the bees nest and will emerge as an adult oil beetle to start the cycle again. 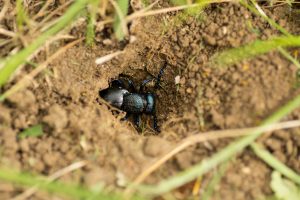