Osprey with catch of the day! 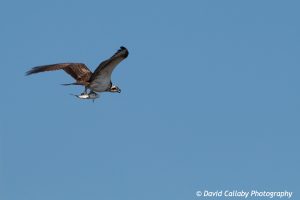 From Sunday 11th until Tuesday 13th September an Osprey was showing well within the Abbotsbury embayment. This migrant raptor is seen annually on the Fleet, passing through on its passage to and from West Africa and Northern Europe.

Individuals are commonly seen taking advantage of the Grey Mullet that reside in the Fleet and this particular bird displayed that perfectly with a masterful fishing lesson for onlookers to witness. The result of which was captured by photographer and friend of the reserve, Dave Callaby, who has kindly let us use his image for our blog. Ospreys on the Fleet will either catch bass in the tidal waters of the East Fleet or Mullet in the ponded waters of the West.

Ospreys, being piscivorous (fish eating), have adapted a unique way to carry their prey to make it easier to fly with it. As you can clearly see in the image, the bird rotates the fish so the head faces forward, improving the aerodynamics of the quarry, thus making it easier to fly. It has been known that Ospreys will actually migrate whilst carrying their quarry, to eat along the way.

When not fishing, they tend to roost to digest their food in the quiet seclusion of the West Fleet. The photograph below (Fig 2) is a distant shot, taken on 12th September by Don Moxom. The bird is on one of the lower left boughs of the left hand pine tree. 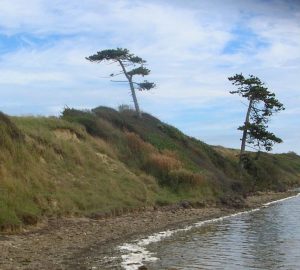