An Early and Unusual Sighting

It won’t be long now before the number of ducks, geese and waders on the Fleet start to swell with the winter migration.

One bird which uses the Fleet during the winter is the Dark-bellied Brent Goose, who returns to the Fleet from its breeding ground on the Arctic tundra of Russia, around the beginning of October, although some are usually seen in the last week of September.

We were surprised this morning to see what looked like a small flock of D-b Brent Geese arriving in front of the Chesil Beach Centre.  However on closer inspection it turned out to be a group of Pale-bellied Brent Geese, these closely related geese, breed on the arctic tundra of Canada and Greenland and generally over winter in Ireland, whilst it is not unusual to see a few appearing within the flock on the Fleet, it is still exceptionally early to see them and in quite large numbers. Perhaps they know something we don’t, it’s certainly a sign that winter is on it’s the way! 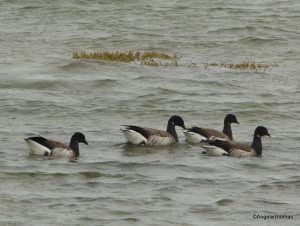 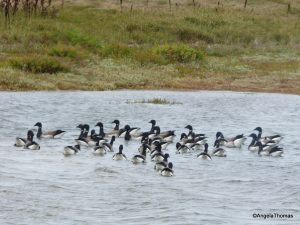 Shortly after a small flock of over 30 flew in.