First ever Black-headed Gull chicks to fledge on the Fleet! 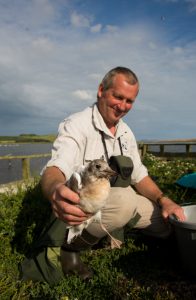 The first ever Black-headed Gull chicks to successfully fledge on the Chesil Bank and Fleet Nature Reserve did so this year at Abbotsbury. In the past there have been a handful of nesting pairs along the Fleet, but they have never successfully fledged any young. This year a pair nested on the ‘Tern Island’ at Abbotsbury, amongst the Common Tern colony. This scenario however, is usually disastrous for the terns as these gulls will predate tern chicks, as proven within other colonies. This pair however did not seem to do too much, if any, damage to the overall success rate of the tern chicks. When the team ringed the Common Tern chicks, we were able to catch up and ring one of the gull chicks, as two had already fledged. 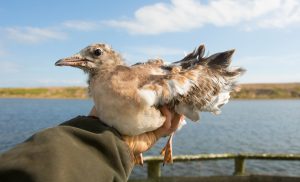